I didn't hear Lizzie up until 7:00 this morning, and thank you Lord! I checked the bathroom, and all was DRY so I went back to bed just to relax even though I knew my sister was awake. An hour later I arose to find her pulling herself together in her bedroom. Whew!

Yet another hour later, Lizzie came into the kitchen all smiles and happy greetings until I told her that today was not a day to wear summer sneakers and brought her boots instead. Once we got them on her feet, however, she was fine with the change.

She really can't be left alone in the kitchen any more either. While I was getting ready for the day, she went into her pill-drawer and because she saw a cup of pills I had set out for dinner, she apparently thought those pills were for now and was starting to take them when I came into the kitchen. Now this would not have killed her, but it evidences my concerns about her being alone for even one moment or two.

I briefly mentioned to her that I think it is time we got a second home, and that a group home might be a good idea. Her response brought back the sister I have missed for so long. "Oh no I won't. You think a group home is so good, YOU go live in a group home." What do I say to that?
Posted by Dr. Yiota at 2:39 PM 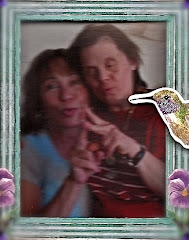